HomeDiamond FAQMoissanite vs Diamond – Which is Better? (Video Comparison)

Moissanite vs Diamond – Which is Better? (Video Comparison) Out of the many simulants available in the market, moissanite is perhaps the most popular alternative to buying a diamond. In this write up, we will take a detailed look at the similarities and differences between moissanite and diamond.

We will also answer commonly asked questions like: “Is one better than the other?” and “How do they look like in real life?” with video comparisons and real-life photographs.

Hopefully, this gives you a better understanding of what diamonds and moissanite really are and which might best suit your needs.

First of All, What is Moissanite?

In 1893, moissanite (silicon carbide) was first discovered in Arizona by Dr. Henry Moissan who later went on to win a Nobel prize in chemistry. It is extremely rare in nature and exist in colorless, green and yellow hues.

One of the reasons behind moissanite’s popularity in jewelry is due to its physical and chemical properties. Moissanite is transparent and extremely hard (scores 9.25 on the Mohs scale). As a result, they can be easily faceted and polished to good luster.

Moissannite is also doubly refractive and has a high index of refraction which gives them a distinctive look. In layman’s terms, when light passes through moissanite, it gets bent more and this results in more light dispersion (fire).

Today, nearly all the moissanite used in jewelry are artificially synthesized in laboratories. Most notably, one of the largest producers in the world is a company called Charles & Colvard and they were the first to patent a process of mass-producing moissanite. Next, What is Diamond?

I’m pretty sure most people are familiar with diamonds and they need no introduction. After all, diamonds are a girl’s best friend, right? Here’s an interesting fact; did you know that diamond is made up of carbon which is the same material found in pencil leads.

The key difference lies in diamond’s molecular structure in which every carbon atom is covalently bonded to 4 other carbon atoms. This gives diamond its superior strength and makes them the hardest object on Earth.

On the Moh’s scale, diamond has the highest possible score of 10. To provide you with some perspective, it is about four times harder than moissanite which scores a 9.25 on the same scale.

In nature, diamonds are formed deep in the Earth’s mantle over billions of years before finding their way to the surface via volcanic activities. However, technological advancements have now enabled man to create diamonds in the laboratories in just a short span of weeks.

For a comprehensive understanding of diamonds and the things to look out for, check out the various sections of Beyond4cs.com about the 4Cs and consumer’s guide.

Visual Differences Between Diamond vs Moissanite

As a consumer shopping for a piece of jewelry, the differences in material properties between diamond and moissanite may not be the things you are most concerned about. In fact, the questions that readers frequently ask often relate to differences in visual appearances and practicality.

Appearance – To the untrained eye, a moissanite can look like a diamond as they both possess some similar traits. However, due to moissanite’s refractive optical characteristics, their polished facet structure is completely different from the diamond’s 57 facets round brilliant cut.

Most moissanite stones are cut with shallow crowns and deep proportions. While this configuration boosts the gemstone’s fire, it compromises the brightness of the stone; resulting in unappealing dark, dead and glassy areas within the stone.

Keep a mental note of this and you will be able to see this effect clearly in the video comparison against a well cut diamond later.

Color – Diamonds can exist in a wide spectrum of colors from the hues found in a rainbow and in varying intensity tones. Most diamonds used in jewelry are white diamonds and are graded in the D-Z color range.

Moissanite is widely available in the near colorless ranges (G-J) and in a limited number of green/yellow tints. Some higher grade moissanite made using enhancement technology can achieve a similar D-F colorless appearance.

Fluorescence – A third of naturally mined diamonds exhibit blue fluorescence which is a cool feature I personally enjoy seeing and showing off to friends. On the other hand, synthetic moisannite doesn’t exhibit fluorescence due to their chemical composition. 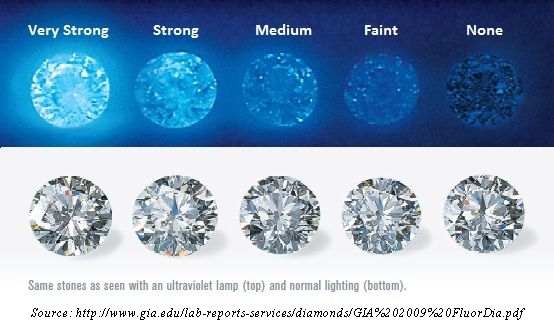 Both moissanite and diamond can be used to make beautiful engagement rings when chosen well. With diamonds, you can cherry pick one that’s truly well cut for sparkle with some due diligence.

On the other hand, you are pretty much at the mercy of the jeweler when buying moissanite because of the lack of tangible data (due to low costs) and the fact that most moissanite aren’t cut well to begin with.

Moissanite vs Diamond Side by Side Video Comparison

Moissanite is often touted as a low cost alternative to diamond with a comparable level of brilliance/sparkle. Well, that’s not true once you look at facts and understand the science behind light performance.

Don’t get me wrong here.

There’s nothing intrinsically wrong with the material properties of moissanite. They can be beautiful IF they are cut well. And that’s the crux of the problem. Most moisannite aren’t well cut because it takes a skilled craftsman and time (these cost money!) to polish them.

Due to economical reasons and the low selling price of moissanite stones, would you expect a master craftsman to have worked on a polished moissanite that costs less than $400? The cold hard fact is, most moissanite are cut terribly (including the one I bought).


There’s something else I want to highlight here as well. Due to moissanite’s higher refractive index, they tend to display more fire (rainbow effect) and this is noticeable even in diffused natural lighting.

Moissanite under magnification with oily appearance.

While some people love the color display of light, there are many others who think this makes the stone look “fake” and “artificial”. The phenomenon is more pronounced in larger carat size stones where they display an “oily like” surface.

Using a Diamond Tester on Moissanite and Diamond

Being a simulant, moissanite is obviously less expensive than the real thing. Let’s do a cost comparison between diamond and moissanite to give you an idea of how much they cost. In general, you can expect to pay less than a tenth of a diamond’s price for a loose moissanite.

While moissanite may be relatively cheaper than diamond, I personally feel there are much better alternatives. Compared to other types of simulants, moissanite is grossly expensive and the optical characteristics are nowhere near a diamond’s.

In fact, if you were going the route of a non-diamond engagement ring, cubic zirconia is going to be a much better option due to its lower cost and better appearance over moissanite.

Feel free to perform your own price comparisons to get a better idea of how much different gemstones cost. The easiest way to do this is to use prices at James Allen or Brilliant Earth as a benchmark.

Where to Buy Moissanite Rings or Diamond Jewelry?

I’m not a fan of moissanite but that doesn’t mean you have to agree with me. Having been in the trade and an avid gemstone collector, I have raked up alot of experience with different vendors and made a number of purchases.

When it comes to moissanite engagement rings, one of the best places to buy them is at Brilliant Earth. They have a range of moissanite in different carat ranges and sizes. More importantly, the settings they make are well crafted and beautiful.

As for the best places to buy diamond jewelry, we had already written a comprehensive article here that describes different vendors in the business and the various products they specialize in.

Diamond vs Mosannite – Which is For You?

Ultimately, the choice between diamond versus mossanite boils down to personal preferences. If you are having trouble deciding, think about what you need the stone for. How important is it to have a diamond?

Can you do without it? Do you need the symbolic meaning of a diamond for a proposal ring or an anniversary gift?

Personally, I feel that moissanite is overrated and is a gemstone that pleases no one. As an alternative to diamond, it is extremely expensive and both its optical/physical properties doesn’t come close to being a diamond. Jewelers and businesses who peddle moissanite with vested interest often market them to be a “superior” alternative over diamonds. I call bullshit on such claims especially when it comes to optical performance.

If you are looking for a simulant that better resembles a diamond, cubic zirconium (CZ) is a much better choice over moissanite. Not only is it significantly cheaper and generally better cut, it is also easily available in departmental stores.

So, for people who are shopping for a diamond alternative, my advice is to ditch moissanite and buy CZ instead. With that, we’ve come to the end of the article. Now, I want to hear from you.

Would you still opt for buying mossanite over diamond? Or would you prefer other types of gemstones? Do leave a comment below and share your thoughts!