You can get an epic looking diamond ring at affordable prices. Find out more below…

Whether you are interested in the world of tabloids or keen in the latest celebrity gossips, paying some attention to what’s happening in Hollywood and the likes is often worth it. When celebrities decide to tie their lives together, the whoop-de-doo is usually astonishing.

The engagement ring chosen by the groom usually steals the limelight in the entire series of events that’s going to unfold. Sometimes, the influence of these choices can actually shake the jewelry industry and start certain fashion trends in the consumer markets.

Let’s take a quick look at some of the most famous engagement rings purchased by celebrities of today and the past. The famous pop star has surprised his fiancé with a vintage-looking ring featuring a radiant cut diamond weighing six carats. Timberlake gave the special ring to Biel on May 7th, 2012 at the Metropolitan Costume Institute Gala in New York City.

The marriage of these two people is probably the most magnificent in the history of the music industry. The start was no different. The rapper proposed to Beyoncé with a diamond ring featuring an enormous 18-carat stone.

Also, the astonishing emerald-cut feature stone designed by Lorraine Schwartz is worth a whopping five million dollars, making it to the list of the most expensive engagement rings ever.

Chosen several times as the most beautiful woman on Earth, Halle Berry received an engagement ring that lives up to her beauty. The golden ring features an emerald stone weighing four carats. If that was not enough, it is said that the main feature stone was specially designed for the occasion by Paris jeweler, Roberto Mazio, who has hidden secret symbols in the stone that only the bride can interpret.

Even if the ring originally was only about sixty-five thousand dollars, the goodwill it represents makes it one of the most prominent rings ever. The diamond in question is so unique that we have to mention it even though it was never featured in an engagement ring. It is still named after the couple which made it famous – you have already heard of the Taylor-Burton diamond, right?

The huge pear-shaped diamond that was often worn by Liz Taylor weighs 241 carats and was bought by Richard Burton for a record-breaking 1.1 million dollars.

After the couple split up, Elizabeth Taylor auctioned the diamond for a whopping five million dollars which she later donated to help build hospitals in developing countries. The Taylor-Burton started an avalanche of diamonds with insanely huge price tags. Since then, diamond rings that cost seven figures have started to appear more and more frequently.

Mike Comrie proposed to Hillary Duff during a Hawaiian sunset with a splendid ring featuring a radiant cut diamond weighing 14 carats. The cost of this astonishing feature stone to Mr. Comrie was a million dollars! 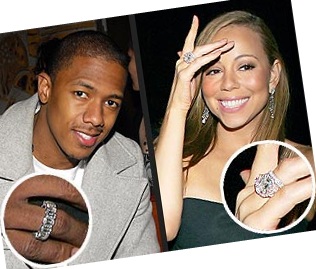 If a million dollars wasn’t enough, let us jump ahead and take a look at what kind of love two and a half millions can buy.

The engagement ring which Nick Cannon used to propose to Mariah Carey features fancy pink colored diamonds: it consists of an emerald-cut center stone weighing ten carats, surrounded by fifty-eight smaller diamonds which add up to a total carat weight of seventeen carats!

Where to Buy Epic Looking Diamond Rings at Affordable Prices?

One question I get asked frequently is: “Where’s the best place to buy replica celebrity engagement rings?”.

Well, my answer is, it depends on what you are looking for. Contrary to popular belief, most of the celebrity ring designs you see can easily be replicated with a simple custom job.

In fact, there are probably existing ring designs that look identical to what the celebrities are wearing. For example, Beyonce’s engagement ring features an emerald cut diamond mounted on a pave split-shank setting that is very similar to the setting below.

For people who are looking to make a fashion statement or an epic looking diamond ring, White Flash is a vendor that offers a wide selection of designer rings for you to choose from.

They also have a capable in-house workshop that can customize any ring designs based on your specifications at competitive prices! Check out some of their breathtaking rings that others have previously purchased below! If you are looking for a beautiful diamond engagement ring, check out the high quality selections available at James Allen and White Flash to find the ring of your dreams today!