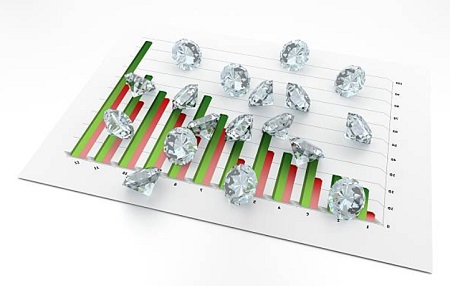 Whether you are someone who is searching for statistics to perform an analysis of the diamond market or looking for the latest diamond market trends to buy an engagement ring, you’ve come to the right place.

Here is an overview of the data and statistics you can find in this write up:

The diamond industry has always been one that is driven by the economic climate and changing trends in consumer behavior. In this section, we take a look at some statistics of the global diamond market and trends that had been happening in recent years. The United States accounts for more than 50% of global diamond jewelry demand and has seen healthy growth rates year-over-year. China is in second place and makes up about 12.2% of global demand. They are projected to become one of the biggest consumers of diamond jewelry with a fast growing middle-income population.

Production Volume: How Much Diamonds Are Mined Each Year? Peak diamond production occurred between 2005 to 2007 where miners produced close to 170 carats per year. The financial crisis of 2009 caused a worldwide recession and demand for diamond jewelry plummeted.

Since then, the global volume of diamonds mined has largely been stagnant before mining activity picked up again in 2017 where production increased by nearly 20%. Russia is by far the world’s largest producer of diamonds with an output of 43.2 million carats. Combined together, the top 5 producing countries (Russia, Bostwana, Canada, Congo and Australia) account for more than 80% of the global supply of rough diamonds. Russia is the world’s largest producer of rough diamonds by volume and it comes as no surprise that the total value of their production is also the highest in the world (3983 million USD). In a relative comparison, Bostwana’s production in terms of dollar value is almost that of Russia’s even though it produces a lot less rough diamonds by volume.

This is because the bulk of Russia’s rough diamonds are industrial grade whereas those of Bostwana’s are gem quality and command a high price per carat. To put simply, Russia produces a lot of low quality rough diamonds that are worth less in market value.

Countries With the Largest Diamond Reserves The largest diamond reserves in the world are found in Russia and the continent of Africa. If you are wondering how much diamonds there are left in the world, the answer is a staggering total of 1170 million carats. Here, I would like to point out that as exploration and new discoveries of diamond deposits are found, this number would likely increase in the future.

In this section, the data compiled here are based on a consumer study performed by Beyond4cs.com and other sources like De Beers. Hopefully, this can help you gain some insights into what people are buying and help you make better purchase decisions.

What is the Average Spend on an Engagement Ring? What is the Average Carat Size of a Diamond Engagement Ring? The average carat size of a diamond engagement ring in the US is 1 carat and American consumers have the biggest average diamond size in the world. In comparison, consumers in other first-world economies typically buy a diamond ring that’s roughly half a carat in size on the average.

Which is the Most Popular Diamond Shape For an Engagement Ring? The round cut diamond is by far the most popular diamond shape for engagement rings and accounts for roughly 50% of diamonds sold in the USA. The next most popular shapes are the princess cut and oval cut. Now, I do want to point out that this is a net aggregate opinion of consumers in the United States as they are the largest market for diamond jewelry.

The choice of shape may vary with different country and culture. For example, in China, round diamonds account for 40% of all diamonds sold. However, the second most popular shape is the heart cut diamond which accounts for 20% of diamond engagement rings sold locally.

What Are The Most Important Factors When Buying a Diamond Ring? The 2 most important things that women care about in a diamond engagement ring is ring design and carat size. So, if you are shopping for a diamond ring for someone, make sure you find out what their style preferences and their expectations of the diamond ring are.

On the other hand, the two most important factors for guys are cost and ring design. As most guys are the ones who are paying for the diamond engagement ring, their budget is one of the key things that affect how they make decisions.

What is the Most Popular Diamond Color Rating? Near colorless diamonds (G to J) represent the bulk of the diamonds purchased for engagement rings. From the statistics above, we can clearly see that G color is the most popular rating that people are buying.

It is also interesting to note that 12% of consumers choose to buy D color diamonds (best grade) for their engagement rings because of symbolic reasons.

What is the Most Popular Diamond Clarity Rating? We also see an interesting 10% of consumers who buy I1-I3 diamonds even though they are perceived as low quality and have eye visible inclusions. People who have been surveyed to buying I1-I3 clarity diamonds typically bought them from large jewelry chain stores and local stores.

Diamond rings are very popular as proposal rings and bridal jewelry. In China, the most popular type of ring setting is the solitaire design and there is a preference for platinum over white gold. On the other hand, consumers in the US have a preference for diamonds with sidestones or halo designs and white gold is the preferred metal for diamond jewelry.

Before the Kimberly Process was introduced in 2003, it is estimated that up to 25% of the world’s diamonds originated from illegal trading activities and nearly 20% of these diamonds were conflict in nature.

Where Are Blood Diamonds Found?

A majority of blood diamonds are found in Angola, Sierra Leone, and Congo. These 3 countries are filled with natural resources, yet remain the poorest countries because of civil wars and corrupt governments.

How Many People Died From Blood Diamonds?

It’s estimated that between 3.5 to 4 million people lost their lives due to blood diamonds. The highest number of casualties originated from the Democratic Republic of Congo where an estimated 3 million people died.

Besides the high death toll, there are many more millions of people who are still dealing with the consequences of these wars. Although the wars have ended, victims still bear physical and emotional scars that they will carry for the rest of their lives.

Lab created diamonds have similar physical and chemical properties as natural diamonds. Both are real diamonds with the differences being that one is created by forces deep within the Earth while the other is made in a laboratory.

On a commercial production scale, there are 2 methods that are used to create diamonds in the laboratories: HPHT (high pressure, high temperature) and CVD (chemical vapor deposition).

Roughly 98% of lab created diamonds (both industrial and jewelry applications) are created by HPHT. In contrast, only 2% of the total volume of synthetic diamonds are made using CVD. The reasons for the stark differences in volume boils down to price economics and production scale. Interest in lab grown diamonds had grown tremendously over the past 5 years due to lower prices and better awareness. Google Trends reported a significant jump in search interest for synthetic diamonds since 2017.

The Downward Trend of CVD Diamond Production Costs in USD Since 2008, the production costs for synthetic diamonds have decreased by 10-fold due to better equipment and cost control efficiency. As technology and manufacturing techniques improve, future reduction in costs is expected for making synthetic diamonds. 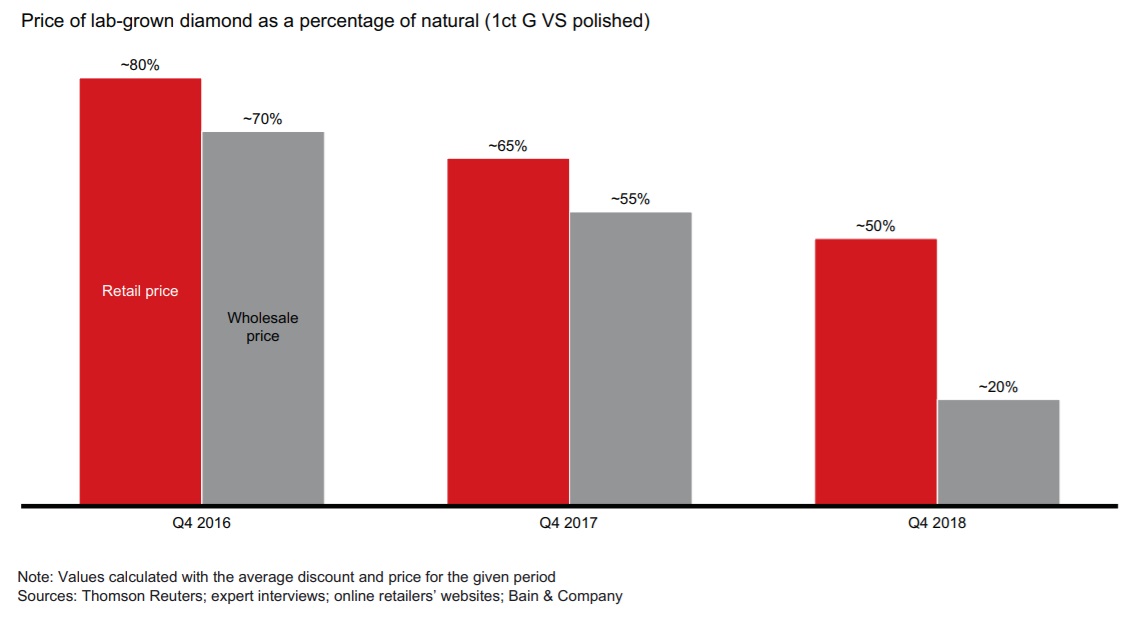 Retail prices for lab created diamonds had been drastically cheaper in 2018 than in 2016. At the time of writing, you could now buy a lab-created 1 carat G/VS diamond for less than half the price of an equivalent natural diamond. Over the years, the market share of lab grown diamonds has been steadily increasing. This can be attributed to the better cost-efficiency of mass production and better awareness of lab created diamonds.

By 2030, it is estimated that 9% of diamond jewelry sold on the global market will be of lab created origins.